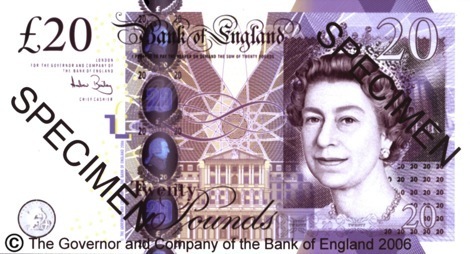 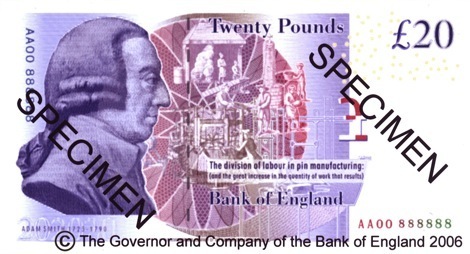 Today the Bank of England issued a new £20 featuring Adam Smith, one of the fathers of modern economics. This is the first design in a new series of notes from the bank known collectively as “Series F.”

The new notes will circulate in parallel with the current £20 (Pick 390), which will be progressively withdrawn from circulation. Measuring 149 x 80 mm, the new £20 is the same size as the current note. The portrait of Queen Elizabeth II is retained on the front, but the new note features a brighter color purple, as well as a large silver holographic strip, a registration device, additional intaglio printing, improved watermark, and more UV features to deter counterfeiters. The new note bears the signature of Andrew Bailey, Chief Cashier.

A portrait of Smith appears on the back of the new note, along with an engraving showing “The division of labour in pin manufacturing” with the parenthetical quote “and the great increase in the quantity of work that results” drawn from his major work, An Inquiry into the Nature and Causes of the Wealth of Nations. The image of Adam Smith is based on a likeness of the portrait of him by James Tassie — Scottish National Portrait Gallery — and reproduced by permission; and the image of pin manufacturing is based on an original image, and by permission of The British Library. Adam Smith (1723 – 1790) is the first economist and the first Scotsman to appear on a Bank of England note.