By: Owen Linzmayer
In: Book, Miscellaneous
Tagged: World
With: 0 Comments 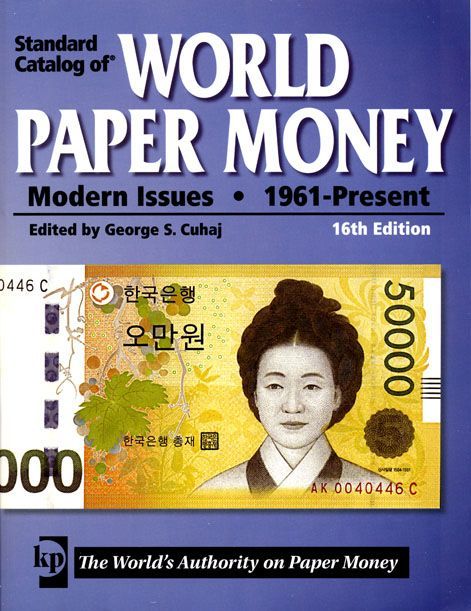 The 16th edition of Krause’s Standard Catalog of World Paper Money is now shipping. I just received my copy and wanted to share my initial impressions.

At 1,112 black and white pages, it’s exactly as large as the previous edition, though its list price is now $60 instead of $55, and it does not come with a disc containing a PDF version of the catalog, which is a great disappointment.

Also somewhat disappointing is that values for VG conditions have been eliminated. Now only VF and UNC conditions are listed. While some will decry this change, I think it’s a reasonable change because most modern notes collectors insist on UNC anyway.

More troublesome is that this edition continues the trend of covering only a fraction of the new note types and varieties that have been issued in the past years, and illustrating almost none of them. It appears that the cut-off for inclusion in this catalog was mid-2009, but many, many notes issued well before then failed to make it into print (The Banknote Update contains over 80 pages of images and info missing from the 16th edition of the SCWPM).

In an attempt to appear more current than it really is, the catalog has assigned Pick numbers to a lot of “expected issues.” The problem with this practice is that many such notes are never released, inevitably forcing the editors to renumber at a future date, much to the frustration of collectors and dealers everywhere (my cursory examination uncovered a half dozen notes that have been renumbered or deleted between editions). Furthermore, the information (such as dates) in the listings for these expected issues often proves wrong, adding to the general confusion.

Speaking of frustrating and confusing, some listings refer to non-existent signature charts, or the signature chart exists, but hasn’t been updated to include the latest signatures, making it impossible to distinguish between varieties.

I haven’t done a thorough check of the entire catalog, but a spot check revealed some obvious pricing problems, such as listing Armenia’s 100,000-dram note at $250 in UNC, even though its face value is $263. The 50,000-won from South Korea, featured on the cover of the new edition, is worth $40 at face, but is listed at $50 in UNC. Good luck finding dealers selling notes with negative or nominal mark-ups.

Like it or not, the SCWPM remains “the bible” for our hobby because its Pick numbers are almost universally used to identify notes. If you intend to get a copy despite its flaws, please support this site by buying the latest edition using this link.