By: Owen Linzmayer
In: Europe
Tagged: Russia
With: 0 Comments 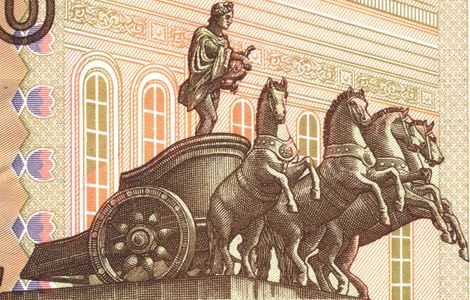 According to an RT.com article dated 8 July 2014, nationalist party MP Roman Khudyakovof has urged Банк России (Bank of Russia) to change the design of the 100-ruble note because it depicts the penis of the Greek god Apollo, in violation of Russia’s 2010 law designed to protect children from “information that could be harmful to their health and development.”

The note depicts a statute of Apollo riding a chariot above the pediment of Moscow’s Bolshoi Theatre. During renovations of the Bolshoi, a fig leaf was added to the statue, covering Apollo’s genitals, so Khudyakovof argues that not only is the note pornographic, it’s no longer an accurate representation of the statue as it currently exists.

According to an article in The Telegraph dated 22 August 2014, the central bank has refused the appeal to withdraw or revise the note, claiming it is not pornographic and the image is too small to be offensive.