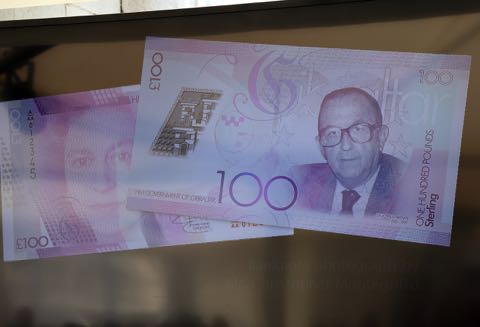 According to a transcript of Gibraltar’s Chief Minister Fabian Picardo speech, a new 100-pound banknote will be put into circulation in the first half of 2016. The note will be dated 21 August 2015, the centenary of the birth of Sir Joshua Hassan. Nicknamed “Salvador” (Saviour), Sir Joshua was chief minister for a total of 22 years and is credited as being the most important architect of Gibraltar’s move towards self-determination. The design of this, the first 100-pound note ever to be printed on polymer substrate, carries a portrait of Queen Elizabeth II on one side and a portrait of Sir Joshua on the other.
2015-08-21
Previous Post: Guernsey new signature 10-pound note (B162d) confirmed
Next Post: Pakistan denies plans to introduce 10,000-rupee note