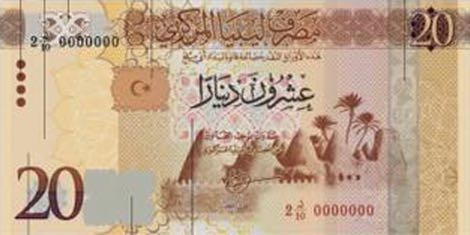 According to an article in The Libya Observer dated 25 May 2016, the eastern Central Bank of Libya (based in the city of Bayda, not the capital Tripoli) plans to introduce new 20- and 50-dinar notes on 1 June 2016. 4-billion dinars worth of new notes were reportedly printed in Russia (likely by Goznak) and bear the signature of Governor Ali Al-Hibri, the rival for Tripoli-based Governor Al-Siddig Al-Kabir. The new notes will reportedly circulate in parallel with the existing notes of the same denominations (B544 and B545, respectively). The designs of both are very similar, though there are slight changes to the security features, and the serial number at right front is horizontal, not vertical, and neither serial number has ascending size digits.