By: Owen Linzmayer
In: Africa, Miscellaneous
Tagged: Comoros
With: 0 Comments 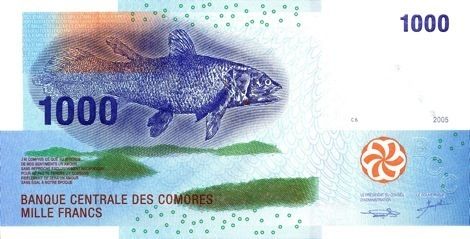 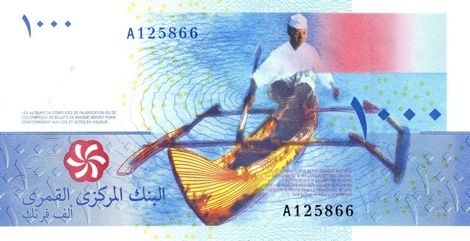 The International Bank Note Society (IBNS) is proud to announce the winner of the 2007 IBNS Bank Note of the Year, awarded to the finest banknote issued in 2006. This year’s award goes to the 1,000-franc note issued by the Banque Centrale des Comores, the central bank of the Comoros, an archipelago located between Madagascar and the east coast of southern Africa. Commendations go to the 10,000-tenge note from Kazakhstan and 100-dollar note from the Solomon Islands.

The IBNS Bank Note of the Year is awarded to the banknote which, in the eyes of the judges, has a high level of artistic merit, an imaginative design, and features that present the best of modern security printing (taking into account the value of the note). The Comoran 1,000-franc note impressed the judges with innovative design, well-balanced color, and sensible use of modern security features.

The front of the 1,000-franc note is dominated by a coelacanth, a pre-historic fish long thought to be extinct, that was found living in the waters off the Comoros in recent years. Its discovery put the Comoros at the centre of the scientific world for a short time and remains one of the small country’s claims to fame. Below the piscine curiosity is an aerial view of several islands that make up the country. Predominantly blue, there are red and green elements to the design on the front of the note.

Poetry is common to the entire series of notes to which the 1,000 franc belongs, with a verse appearing on the front and the back of each note. The verse on the front of the 1,000-franc note can be translated from French as:

From our feelings, what you expect I understood
For it is a love that is so absolutely exclusive
That, not to lose you, I hereby consent.
Truthfully, it will be a love
That our times have never seen.

Continued on the back of the note is a further verse which translates as:

The final line below the verse identifies the author, Mab Elhad, and the book in which his verse appears: Kaulu la Mwando (meaning First Word in the Comoran language). The book was published in 2004 and the verses of the author, a Comoran policeman, celebrate his Comoran life and nationality.

The back of the award-winning note is dominated by a Comoran man in a canoe, surrounded by red and blue designs of differing character. While the name of the issuing authority is in Arabic on the back of the note, the warning to counterfeiters is in French (reflecting the nation’s French past).

Despite a low face value (approximately US$2.70 at current exchange rates), the 1,000-franc note sports an impressive array of security features. Portions of the design are printed with the intaglio process, imparting a tactile element to the raised ink, along with the latent image created by the BCC embossed above the signatures. Counterfeiting is made more difficult through the use of microtext, incorporation of a perfect-registration device, and the inclusion of Omron rings. The paper contains an embedded security strip that fluoresces under UV light, and a watermark of a crescent moon, four stars, and the letters BCC. Finally there is an iridescent band on the front of the note that can be seen only when tilting the note at an angle to the light.

While the elements of the design, the security features, and the production of the note are not unusual as individual elements, it is the sum of the whole that lifts the note above the ordinary and which made this note a clear winner as the IBNS Bank Note of the Year.

Every nation should strive to create individual masterpieces for their paper money; unfortunately this is not always the case. However, with the issue of the new series by the Comoros, it is pleasing to see that at least one issuing authority is successful in meeting the expectations of banknote enthusiasts around the world. The IBNS congratulates the Banque Centrale des Comores and the designers of its 1,000-franc note.