By: Owen Linzmayer
In: Central Asia
Tagged: Russia
With: 0 Comments 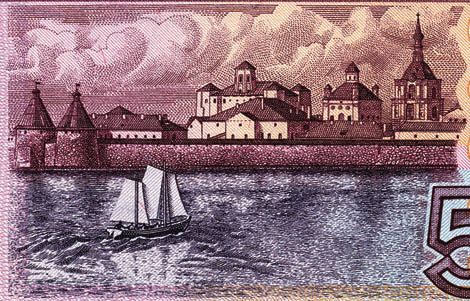 According to a Mosnews.com article dated May 22, 2009, “elderly residents of the city of Archangelsk, North Russia, have asked the Minister of Finance, Alexei Kudrin, to change the image on the 500-ruble banknote (Pick 271, shown below), which they claim is a picture of a Soviet death camp. The note carries an image of the Solovetsky Monastery, a UNESCO world heritage site. However, in the Soviet era between 1926 and 1938 the crosses were removed from the buildings and the site was used as a special prison and a gulag prototype.”

“We all understand that they just wanted to depict one of the most beautiful sights of our city, the famous Solovetsky Monastery, but they have accidentally depicted the Solovetsky death camp,” 72-year-old Arkhangelsk resident Vasily Fedotov said.

“If you look at the [back of the] banknote closely you will notice that the holy crosses, which usually top Orthodox churches, are only seen on one golden dome in the picture. This means that the artist has painted the death camp. Our banknote is the only note in the world with a picture of a World War II concentration camp. Our feelings are hurt. We feel pain for veterans and for the people who died in these damned death camps. I hope that Alexei Kudrin will hear our prayers and change the picture,” he added.