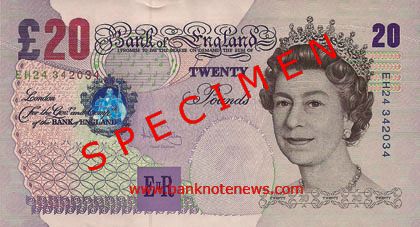 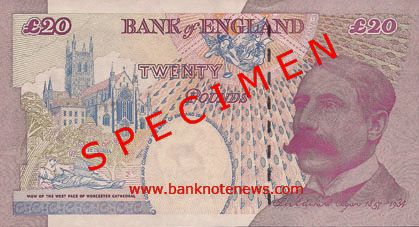 According to a Bank of England press release dated 8 March 2010, the 20-pound (US$30.10) note with the portrait of composer Sir Edward Elgar on back will cease to be legal tender after 30 June 2010. “This note has been gradually replaced by the Adam Smith £20 which was introduced in 2007. Announcing this today, the Bank of England assured holders of the Elgar £20 banknote that they could certainly use the notes up to, and including, 30 June. After that date the note will no longer have ‘legal tender’ status. The note will not have to be accepted in payment, or in change, in retail outlets after this date.”

“For several months from the end of June banks, building societies and Post Offices will accept Elgar £20 notes for deposit to customer accounts and for other customer transactions. Agreeing to exchange the notes for non-customers is at the discretion of the individual institution. The Bank of England will always give value for these notes (and all other banknotes the Bank has issued).”

“Andrew Bailey, the Bank of England’s Chief Cashier, said, ‘The Elgar £20 banknotes were first introduced in 1999 and we introduced the Adam Smith £20 banknotes three years ago. We said at the time that the two designs would circulate in tandem, with the Elgar notes gradually being withdrawn over the next few years. It is time now to withdraw the Elgar £20 notes completely, with the Adam Smith £20 banknotes to be the only £20 note design continuing in circulation.’”