By: Owen Linzmayer
In: Africa, Challenge
Tagged: Mauritania
With: 1 Comment

Today’s challenge is to identify the following man whose face appears as the watermark on all of Mauritania’s notes since 1974.

This man’s face appears as the watermark on all of Mauritania’s notes since 1974, and is shown here from an unissued specimen design of 1981: 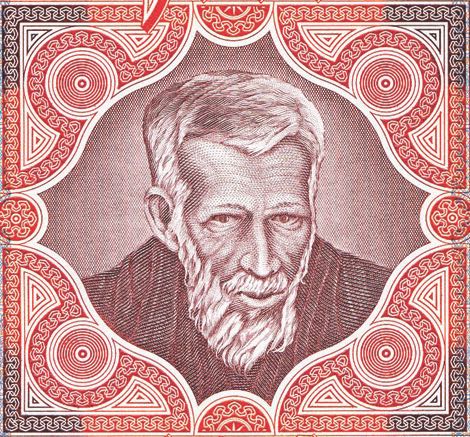 IDENTIFIED: The watermark has an interesting origin story. When bank governor Ahmed Ould Daddah was on the island of Gorée in 1974, he purchased a portrait of a bearded elderly man by Myrto Debard, a French artist. The subject of the portrait was Sidi Ethmane Ould Mohamed Mahmoud Essemlaly, a Smalils sharif, though the use of his portrait in the watermark was meant to be representative of a generic wise, old Mauritanian man, not a specific tribeman. His portrait appears in the watermark of all notes until the 2017 issues.