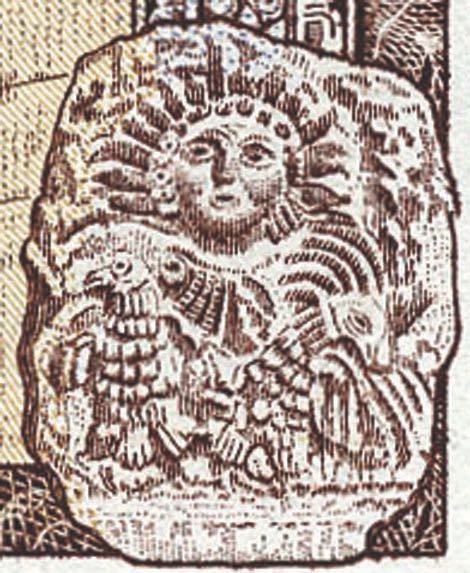 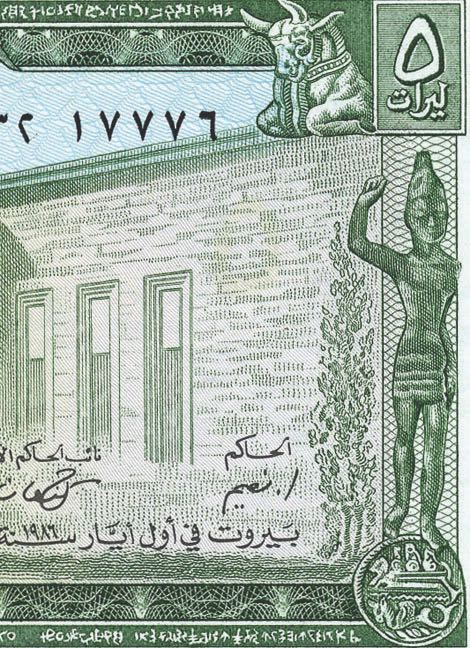 I am cataloging the Bank of Lebanon’s notes for publication in The Banknote Book, and I have been unable to identify a few items which appear on these notes.

The front of the 1-livre notes (B501) dated 1964-1980 depict the ruins of Corinthian columns of the Roman Temple of Jupiter in Baalbek. However, I can’t find any info on the unknown archeological artifact shown below.

The front of the 5-livre notes (B502) dated 1964-1986 depict the National Museum of Beirut building with columns. However, I can’t find any info on the kneeling bull sculpture, figure with raised arm standing on coin, nor the meaning or language of the writing in the border.

IDENTIFIED: The bull is a protome from the Aecheminid Dynasty (5th Century BC) found in Sidon, Lebanon.
IDENTIFIED: The writing in the margins look to be Phoenician, though the meaning and source of the inscription is still unclear.
IDENTIFIED: The figure is Baal with raised arm standing on 400-330 BC Phoenician 1/8th shekel silver coin from the City of Byblos, King Adramelek.

If anyone knows what these objects are, please contact me with details.