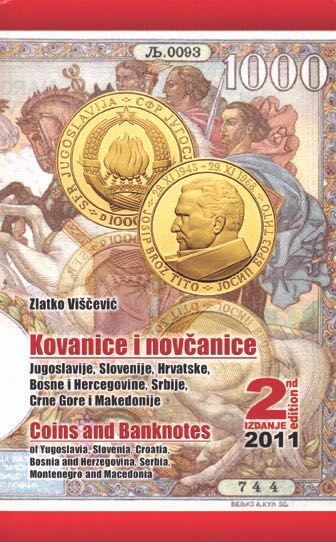 Download the free sample chapter: Coins and Banknotes of the Kingdom of Yugoslavia.

As author Zlatko Viščević mentions in the introduction to his impressive new catalog, collecting banknotes from the area of the former Yugoslavia can be quite challenging due to the large number of notes issued over the years. Compounding the problem is the Serbo-Croatian text on these notes and the complicated history of the region, both of which may be unfamiliar to many collectors. This new catalog doesn’t attempt to explain the tumultuous politics of the past three centuries, but is an invaluable addition to the reference library of anyone who specializes in collecting notes from this part of the world.

The first edition of this catalog was published in 2007. The second edition covers regular and commemorative notes issued in the intervening years, goes into greater depth in the descriptions, and now also includes special, fantasy, and private issues. In short, if you already own the first edition and like it, you’ll definitely want to buy the much-improved and expanded second edition.

Coins and Banknotes’ title spells out exactly what’s inside. The first half of the book is devoted to coins, the second half to notes, with chapters for the seven countries in each section. Within the chapters, the coins and notes are listed chronologically by denomination, which makes it easy to locate a particular piece and track changes over time, but at the expense of presenting complete families with common or complementary designs.

Each note type listing contains the denomination, catalog number, cross-references to Pick numbers and other specialized catalogs, reduced-size illustrations of the front and back, description of design elements and security features, and finally a list of varieties, with checkboxes for tracking your collection. Each variety is assigned a six-level rarity rating, and has values in euros for up to four levels of condition. Some notes also have auction results at the bottom of the page, though the values and results don’t always agree. Occasionally there are inset illustrations of details which determine varieties. These are useful in most cases, but sometimes the differences aren’t obvious due to the small size or lack of color in their reproduction.

Specialized collectors will appreciate the comprehensive lists of prefixes, as well as the inclusion of specimen and replacement notes in the variety tables, not to mention the assortment of “irregular issues” (color trials, partial proofs, etc.) and private/fantasy notes covered separately. While there isn’t much explanatory text regarding these issues, anyone interested in pursuing further research can consult the bibliography of source books and web sites at the end of each chapter.

The longer passages of prose in the catalog are presented in both Croatian and English, but the descriptions of the notes and their varieties are in Croatian only, which is a little frustrating if you care about such details and don’t want to rely upon Google Translate. Fortunately the English text everywhere else in the book is good enough that it’s easy to overlook the minor typos and understand the gist of the intended meaning.

One complaint I have about the catalog is its size. This is a bulky, compact tome measuring a whopping 55 millimeters thick, and heavy enough to break a toe if dropped on a foot. I would have preferred the coin and banknote sections split into two separate volumes, both printed in a larger format. As it is, the small black and white illustrations don’t do justice to the beauty of the notes, and the tiny text is hard to read if your eyesight isn’t perfect.

With this second edition, Zlatko Viščević has created a solid reference for collectors of notes of Yugoslavia and its constituent republics from 1849 to 2011. Coins and Banknotes delivers a dense helping of numismatic information at price that can’t be beat.