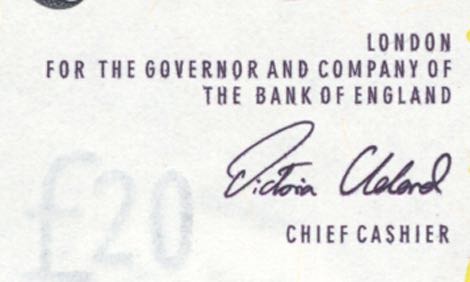 According to a press release dated 24 February 2015, “With effect from 3 March 2015, the Bank of England will be issuing into circulation £10, £20 and £50 notes bearing the signature of the current Chief Cashier, Victoria Cleland. These notes are the same design as those currently in circulation which bear the signature of Chris Salmon, the previous Chief Cashier, and of his predecessors Andrew Bailey and Merlyn Lowther. Cleland notes will circulate alongside the remaining Salmon, Bailey and Lowther notes, with the same status.

The first £5 notes bearing the signature of Victoria Cleland will be printed on polymer and introduced into circulation from the second half of 2016.

£10, £20 and £50 notes bearing Victoria Cleland’s signature will be made available to the cash industry from 3 March 2015 and will be dispensed from some ATMs and branch counters shortly thereafter. Low serial numbered notes will not be available from the Bank’s counter.”

Anyone interested in buying one of these notes can contact the contributor by clicking the link below.