By: Owen Linzmayer
In: Book, Europe
Tagged: Greece
With: 0 Comments 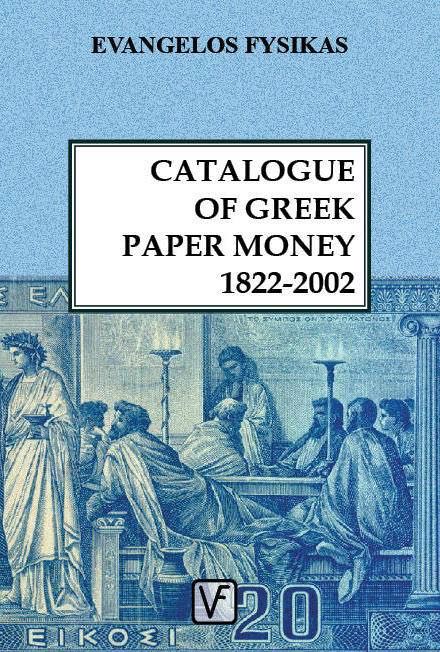 Kudos to author Evangelos Fysikas for having created a wonderfully accessible and detailed specialized catalog covering Greek notes issued by various banks from 1822 until the 2002 introduction of the euro.

The chapters are broken up by issuer, with the notes presented chronologically, and then by denomination. While the descriptions of the notes’ imagery and designs are very bare bones, the listings do contain details of importance to specialized collectors and generalists alike, including printer, dimensions, introduction/withdrawal dates, and watermarks. Instead of prices, the catalog shows rarity ratings (1-9) for four grades of condition (F, VF, XF, UNC). This is sure to disappoint collectors hoping for guidance with valuations, but by eliminating prices, the catalog won’t appear obsolete if the market changes drastically, which is not out of the question given Greece’s recent economic troubles.

Each chapter begins with a fair amount of introductory text in Greek followed by English translations which are remarkably clear and unambiguous. I appreciate the historical background contained in these sections, helping explain why notes were issued as well as describing the differences between the many issues.

My biggest disappointment with this catalog is the use of black and white illustrations which simply don’t do justice to the beautiful color notes. Also, a fair number of the earlier, rarer notes are not illustrated at all. Another disappointment is a lack of Pick numbers in the main listings. Fortunately there is a cross-reference table in an appendix, but that’s not nearly as convenient.

For any serious specialized collector, Catalogue of Greek Paper Money is a must-have reference, if for nothing other than the appendices which succinctly list every note variety by date, prefix and serial number ranges, and signatures.