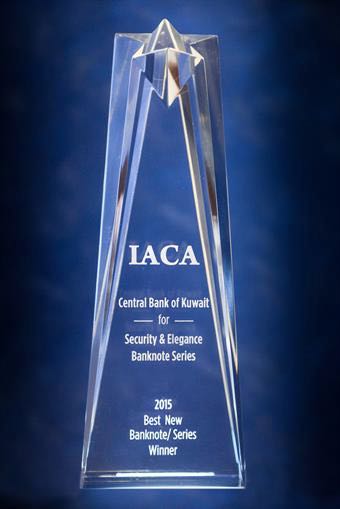 According to an article on the Kuwait News Agency site dated 18 May 2015, the International Association of Currency Affairs (IACA) awarded the Central Bank of Kuwait the 2015 International Award for Best Banknote issue for its sixth series of notes (B229a – B234a) issued 29 June 2014.”This is considered a most prestigious award within the banknote industry and is based on votes cast by central banks and international companies specialised in the production of banknotes in a competition between currencies issued by eighteen countries around the world.
In making the award the sponsors indicated that the sixth banknote issue deserved to win due to the visual artistry and high levels of technical and security sophistication of the notes, coupled with the considerable emphasis placed on reflecting the country’s heritage as well as its modern style. The six denominations of the new currency banknotes all feature the landmarks of the State of Kuwait and its political and economic milestones. Notes have a vibrant design, each capturing a different aspect of Kuwait culture – such as sea and land life, democracy and Islamic history. Additionally, consideration has been given to the needs of the visually impaired through the use of raised print which help distinguish each banknote’s value.
On this occasion, His Excellency Dr. Mohammed Y. Al-Hashel, Governor of the Central Bank of Kuwait, expressed his pleasure and pride in achieving this very significant award, and further stated that the Sixth Issue had also been awarded Regional Banknote of the Year 2014 (Asia) at the High Security Printing Conference in Manila, the Philippines.
His Excellency, The Governor indicated that such awards represent recognition by specialised organisations of achievement in design, the incorporation of latest security features and relevance of symbolism with regard to the State of Kuwait, its accomplishments and economic milestones throughout history.
In acknowledging the international awards given to the Sixth Issue of KWD banknotes, His Excellency, The Governor dedicated such achievements to His Highness the Amir, Sheikh Sabah Al-Ahmad Al-Jaber Al-Sabah and His Highness the Crown Prince, Sheikh Nawaf Al-Ahmad Al-Jaber Al-Sabah, may Allah bestow them good health and wellbeing, in recognition of their enduring support to the Central Bank of Kuwait and their benevolent guidance of our beloved Kuwait and the welfare of its kind people.”
2015-05-18
Previous Post: Bolivia new signature 10-boliviano note (B412e) confirmed
Next Post: Canada new 20-dollar QEII commemorative note (B376a) reported for introduction in 2015