By: Owen Linzmayer
In: Book, Europe
Tagged: Isle of Man
With: 0 Comments 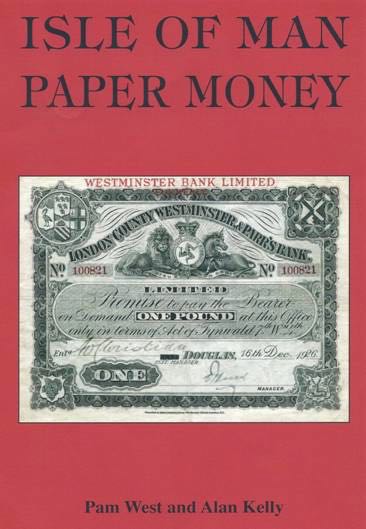 Reviewed by Jonathan Callaway (full disclosure: a contributor to this catalog)

You do not have to be a collector of Isle of Man notes to recognise the contribution this book makes to our understanding of the notes issued on this small island in the Irish Sea, part of the British Isles geographically but not part of the United Kingdom politically.

Pam West and Alan Kelly have reviewed and catalogued every example of paper money ever issued on the Isle of Man. There have been earlier catalogues but none is as comprehensive in its coverage and this is the first one to provide a complete pricing guide.

The book opens with an extensive introduction chapter contributed by Jonathan Callaway covering not only the historical background but also a brief outline of the currency history of the Island. The first section of the catalogue proper covers the many early 19th century card money issues which were abolished in 1817. Many new discoveries have been listed and many new images of these rare pieces are included. The authors have trawled not only institutional collections on the Island and elsewhere but also gained access to the leading private collections.

The next section deals with the first banknotes proper on the Island, starting in 1788 and covering the early issues ahead of an Act of the Tynwald (i.e. the Isle of Man’s own parliament) in 1817 which set out the Isle of Man’s first regulations for banknote issuance. The ensuing chapter covers firstly the various private banks licensed to issue notes under the 1817 Act. Once again many previously unknown notes have been found and illustrated. The chapter then goes on to cover the Isle of Man’s first joint stock banks. These better capitalised banks did eventually drive the private banks out of business but not without a few casualties of their own. There are potted histories of each one including the ill-fated Bank of Mona which abruptly ceased trading when its Scottish parent collapsed catastrophically in 1878. Each bank’s note issues are carefully set out with every signature variety described and illustrated. Proofs and essays are also listed and where possible illustrated.

The complex history of Dumbell’s Bank comes next, again with illustrations of a number of very rare notes and a fully detailed listing of the bank’s issues. This bank failed in 1900 and creditors got just 12s 7½d (63p) in the pound although the note holders were paid out in full – hence fully issued notes are rare today.

The final note issuing bank to be established on the Isle of Man was the Isle of Man Joint Stock Banking Company Limited, in November 1865. The bank’s issues are covered with the same degree of detail as previous issuers but there is more – when Waterlow & Sons Ltd took over the printing contract in 1927 they used the positional plate letters seen on all the notes they produced. Here the book sets out the plate letter sequences in remarkably full detail. A total of 530,000 £1 notes were printed by Waterlows with one master plate for each side of the note, each with four impressions on it. Each impression was given its own plate letter and the book lists in full the complex pattern of plate letters, prefixes and dates. The original master plates were re-engraved in 1952 and each of the four impressions given a new plate letter. On top of this there were frequent signature changes and again these are set out in complete detail. For specialist collectors this is as good as it gets! Waterlow also printed 7,200 £5 notes for the bank between 1927 and 1960. Such a tiny print run required just one plate for each side but there are still five date and signature varieties to collect despite the fact that 2,600 of these notes were never issued.

In 1896 saw the first of the English banks arrive to offer the local banks serious competition. Four English banks eventually issued their own notes. These issues are popular with many collectors due to the fact that they are the only banknotes any of these banks ever issued; they were unable to issue notes in England itself due to a different legislative environment and the dominance of the Bank of England. Once again the book does not let collectors down and provides every level of detail on type, variety and signature changes through to 1961 when the Tynwald withdrew the right for commercial banks to issue their own notes.

The book next devotes a long chapter to the Internment Camp issues from both World Wars. As a small island located midway between Britain and Ireland, the Isle of Man was deemed to be an ideal location to intern ‘enemy aliens’ during both global conflicts. These were civilians originally from the countries the United Kingdom found itself at war with. Many of the camps issued their own ‘currency’ in the form of vouchers and canteen tickets. The many issues are covered here in unparalleled detail with many issues recorded and illustrated for the first time. A wealth of new information is offered and much fascinating background is provided on the camps themselves.

The final third of the book focuses on the issues of the Isle of Man Government – a much loved and widely collected series which has been running for over 50 years and still going strong. All these beautiful notes carry a portrait of H.M. Queen Elizabeth II and the many varieties and signature changes are naturally covered in the full detail we have come to expect. Nearly every known proof, specimen and colour trial is illustrated and once again a lot of new information has been unearthed for collectors to enjoy.

‘Isle of Man Paper Money’ covers well over 200 years of paper money history in its 412 pages. It achieves a level of detail few catalogues can aspire to and will stand for many years as the definitive guide to the Isle of Man’s paper currency issues. The book is beautifully produced and all illustrations are in full colour. This reviewer cannot recommend this book enough. It would grace the shelf of any paper money enthusiast and surely whet the appetite of anyone who has yet to start collecting these fascinating and lovely notes.