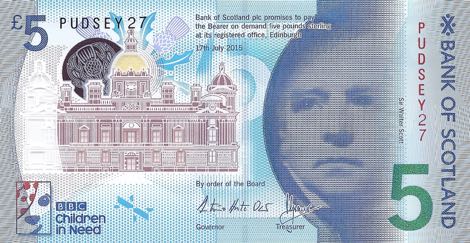 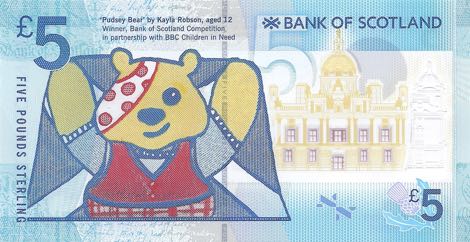 According to a press release dated 8 October 2015, the Bank of Scotland has unveiled the limited edition commemorative 5-pound banknote to be auctioned in aid of BBC Children in Need in November. The notes feature a picture of the charity’s Pudsey bear in a design produced by 13-year old Kayla Robson who won the Bank of Scotland’s competition to design a banknote. Just 50 of these notes have been produced by De La Rue and the use of the Safeguard substrate has allowed novel use of secure windows in the image of the Bank’s headquarters The Mound in Edinburgh.

The serial numbers on the note will also be unique with the first 40 notes using the serial code PUDSEY01 – PUDSEY40. The remaining 10 banknotes will be available for personalized serial numbers such as initials and date of birth. After the one-off charity auction, most of the rest of the notes will be auctioned by Spinks auction house in December 2015.