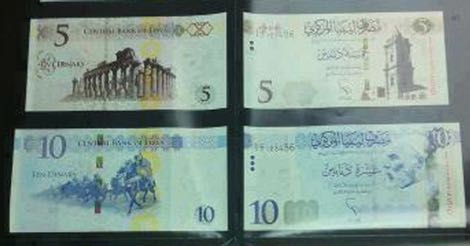 According to a Libya Herald article dated 8 December 2015, on 13 December the Central Bank of Libya introduced the following new 5- and 10-dinar notes.

Curiously, these notes are different than those shown in the following photograph which appeared in photographs in various news sources in early 2013. All denominations except for the 5- and 10-dinar notes shown below were eventually issued that year. In October 2013, gunmen stole 55 million dinars worth of notes from a bank van. If the unissued notes were part of the loot, it’s possible that the bank decided to change the designs to make the haul worthless.