By: Owen Linzmayer
In: Europe, Polymer
Tagged: England
With: 0 Comments 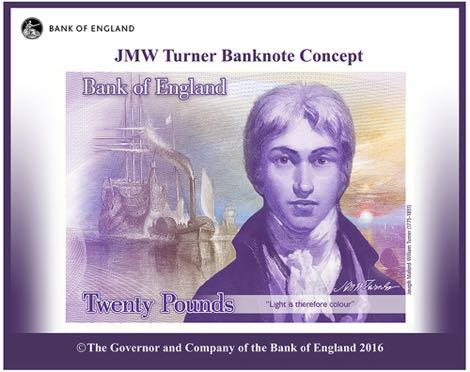 According to a press release dated 22 April 2016, the Bank of England has announced that J.M.W. Turner will appear on the next 20-pound polymer banknote due to be issued by 2020.

Commenting on the decision, Bank of England Governor, Mark Carney said: “I am delighted to announce that J.M.W. Turner has been chosen to appear on the next £20 note. Turner is perhaps the single most influential British artist of all time. His work was transformative, bridging the classical and modern worlds. His influence spanned his lifetime and is still apparent today. Turner bequeathed this painting to the nation, an example of his important contribution to British society.”

As shown in the concept image, the design on the reverse of the note will include:

The full design of the note and its security features will be unveiled closer to it entering circulation.