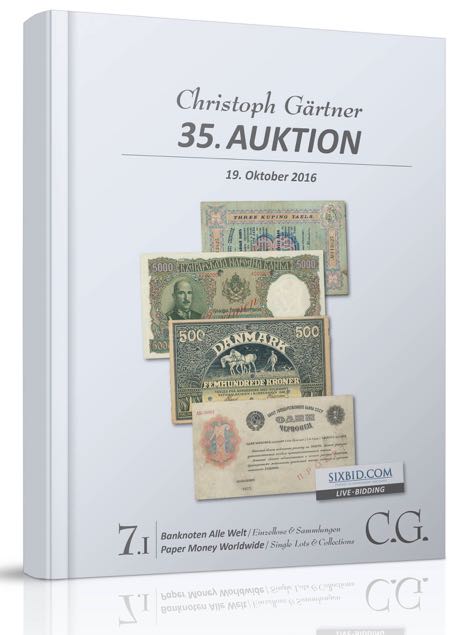 According to a press release, Christoph Gärtner auction 35 contains more than 3,000 banknote lots from all over the world, and all are now online on Sixbid.Among them many rarities from Europe with rarely seen specimen banknotes including a comprehensive collection of Bulgaria will be offered.

“A special focus on banknotes from Russia and the Ukraine will be created by 1,400 different lots which will be offered as small collections and rare single notes. They start with the very early 18th century state issues, containing for example the very rare issue of 1,000-rubles 1895 P.A77, many specimen notes and nearly all issues of the “chervonetz”-series of the 1920s. The highlight of this section will be a prototype of a not issued project design of a 1-chervonets banknote from 1923. Furthermore a wide range of Russian regional and local issues will be auctioned, from North Russia to the far eastern regions – surely an exceptional collection of banknotes and an outstanding possibility to complete a collection. But the auction will also show high value banknotes from Asia and Africa to complete this impressive offer of world banknotes which are waiting for your bids.”