By: Owen Linzmayer
In: Commemorative, Europe
Tagged: Ireland
With: 0 Comments 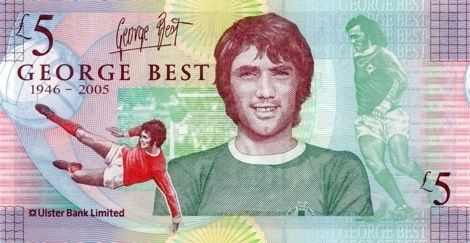 Northern Ireland’s Ulster Bank today announced that it will release a limited edition £5 (US$8) note featuring legendary football (soccer) star George Best. The bank plans to issue one million commemorative notes in November to coincide with the first anniversary of the death of the celebrated Northern Irishman and Manchester United star at age 59 due to multiple organ failure following decades of alcohol abuse.
Application forms will be available from Ulster Bank branches in Northern Ireland & Republic of Ireland or online from this web site starting November 13. The commemorative notes will then be available to purchase at any Ulster Bank branch in Northern Ireland starting November 27.