History of Paper Currency in the Seychelles available 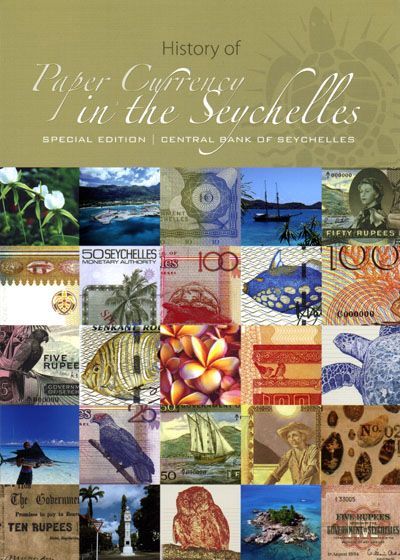 On December 2008, the Central Bank of Seychelles published a special second edition of its publication that traces the history of paper currencies in the Seychelles, dating from the period of French colonization to the present.

Entitled “History of Paper Currency in the Seychelles,” the new 55-page booklet, in full colour, should prove useful not only to banknote collectors but also for educational purposes, as it includes a section which describes the flora & fauna appearing on the most recent paper currencies of the islands.

Divided into sections pertaining to marked periods and events in the life of the Seychelles currency, the booklet provides colourful illustrations of the different forms of paper currency used over the years.

Information for the booklet was compiled by a small group from the Central Bank with the help of the National Archives and several individuals who are experts in their fields. They include Adrian Skerrett (conservationist), Dr. Jeanne Mortimer (biologist and conservationist), Julien Durup (archivist and historian), Kantilal Jivan Shah (historian, naturalist, conservationist, artist, photographer, healer, numismatist and philatelist) and Stella Doway (Senior Museum Curator).

In a foreword to the publication, CBS Governor Francis Chang Leng says: “It is a rewarding feat for readers to explore the different varieties, sizes and designs of the various denominations of the Seychelles rupee notes, which have been issued over the years, not forgetting the individuals who were in authority in the country at the time the notes were printed and issued. Not only is this booklet very informative, but it can also be used as a guide for currency enthusiasts.”

The Central Bank of Seychelles sells copies of this book from its web site, but isn’t very responsive to email inquiries, and only accepts wire transfers which are costly and time-consuming. After jumping through a lot of hoops, I was finally able to obtain a few copies of this amazing book, but these have now been spoken for. Good luck to anyone attempting to purchase directly from the CBS. By the way, the CBS web site still shows the first edition of this book, but I believe that has sold out and that only the second edition is currently available.