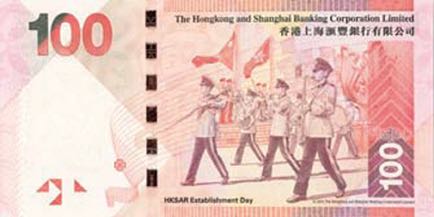 According to an article in The Standard dated 25 July 2011, the Hongkong and Shanghai Banking Corp has admitted to making a mistake in the design of its new 100-dollar (US$12.85) note which was officially unveiled on 20 July and slated for issuance between November 2011 and January 2012. The back of the note depicts the flag-raising ceremony of the SAR Establishment Day with a marching band playing in front of the Golden Bauhinia Square, where the national flag and regional flag of Hong Kong are flying. The problem is that the bauhinia flower on the regional flag is reversed from the correct orientation shown here:

“HSBC has immediately proceeded to redesign and reprint the faulty banknotes, with a view to putting them into circulation early next year as scheduled,” the bank said in a joint statement with the Hong Kong Monetary Authority (HKMA) and the government’s administration wing.

HSBC was responsible for the design of the notes, while the HKMA reviewed the design before revealing it to the public. The administration wing also reviewed the banknotes for approval. “The three parties had not detected the issue,” the statement said. “We sincerely apologize for the incident.”

HSBC will bear all relevant costs for revising the design, remaking the plates and printing the new notes. The cost of producing each new note is about 60 HK cents (US$0.08).

It will be interesting to see if any of the error notes make in onto the collector market.