By: Owen Linzmayer
In: Book, Europe
Tagged: Gibraltar
With: 0 Comments 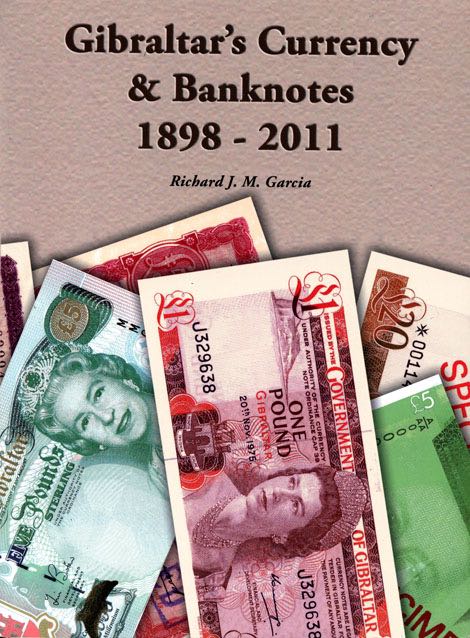 Richard Garcia’s latest book addresses a topic that has never hitherto been studied, that of money in Gibraltar from 1898 to 2011. The choice of dates was deliberate. Gibraltar adopted sterling currency as the only legal tender in Gibraltar in 1898. It was in 2011 that the Gibraltar Government assumed sole responsibility for the design, printing and production of banknotes, taking over responsibilities that until then had been the preserve of a Secretary of State in England. A lot happened in between.

The book is not just about banknotes: it sets out to place Gibraltar’s currency in a social history context, looking at how Gibraltar was changing and developing and how these changes were reflected by our banknotes and coinage. It is the fruit of research in the Government Archives and in the Treasury. It explores a number of areas including:

There are 52 colour illustrations in the book. The design of the front and back of every design used for a Gibraltar banknote is depicted, including the rare notes of 1914. There is also a complete listing of all 73 currency notes issued by Gibraltar, indicating the date of issue of the note and the signature on it.

The book is a companion to the article written by Richard Garcia and which was published in the Gibraltar Heritage Trust journal, tracing Gibraltar’s currency from 1704 to 1872, when Spanish currency was adopted as Gibraltar’s only legal tender.

Check out other book reviews and news on the Books page of this site.