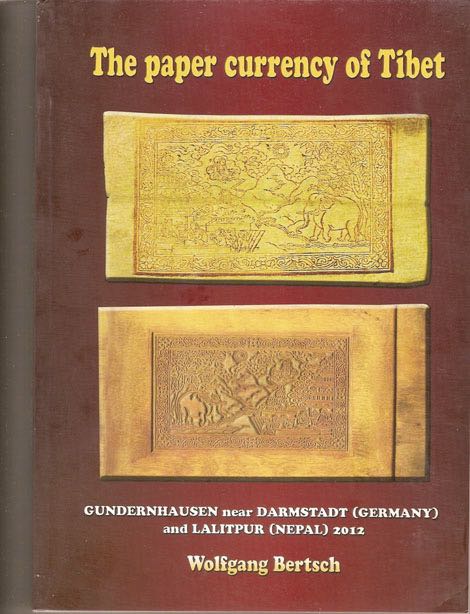 You can order the book from the author: Wolfgang Bertsch

Tibetan banknotes were issued between 1912/13 and 1959. The first series of “Tam” notes was printed by hand with woodblocks on handmade paper. The multicoloured 50 Tam notes and the following issues in “Srang” were machine printed on native papers. All Tibetan notes were numbered by hand by specially trained calligraphists.
Owing to their artistic design Tibetan banknotes can be considered as part of Tibet’s cultural heritage.
This book explores the historical background which led to their issue, the way in which they were produced and the merit of their artisic design.

The first four chapters of the book are dedicated to the paper notes which were printed and released in Lhasa and include a catalogue part with estimated values of the different issues and their variants. The fifth chapter is dedicated ot semi-official notes issued by an Eastern Tibetan monastery, while the last chapter is dealing with banknotes which bear both Chinese and Tibetan inscriptions and were put into circulation by Chinese authorities in the former province of Xikang which comprised parts of Eastern Tibet and Western Sichuan. Ten apendices provide further information for the specialist and an extensive bibliography concludes the book.

The book is profusely illustrated; all types of the banknotes and many variants and trial prints are reproduced in colour.

With this comprehensive study of Tibetan paper money the author has in mind both the more academically inclined reader who wants to be thouroughly informed about one fascinating aspect of Tibet’s cultural history of the 20th century and the collector of Tibetan banknotes who wishes to identify the pieces in his collection and find out their approximate market value.