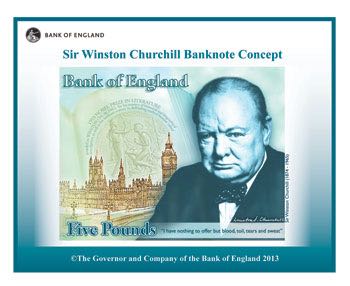 According to a press release, the Bank of England will feature Winston Churchill on a new 5-pound note to be issued in 2016.

Commenting on the choice, the Governor said: “Our banknotes acknowledge the life and work of great Britons.  Sir Winston Churchill was a truly great British leader, orator and writer.  Above that, he remains a hero of the entire free world.  His energy, courage, eloquence, wit and public service are an inspiration to us all.  I am proud to announce that he will appear on our next banknote.“
The plan is for the Churchill note to be issued as a £5 note, and that it shall be issued during 2016; but those choices may be reviewed as plans for issuing the new note are finalised. Features of the design on the reverse of the note will include:

Further details on the full design of the new note will be revealed when the new note is launched, together with a full promotion and awareness campaign.